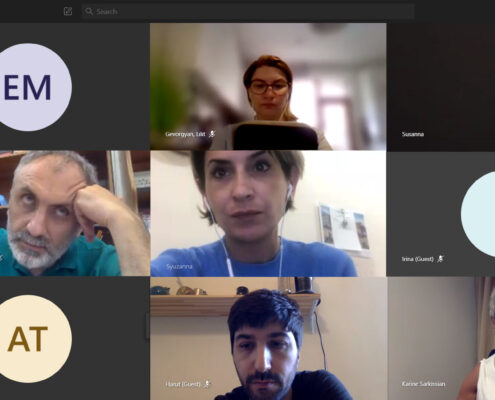 The Meeting participants updated on the leads of the One to One calls with the companies who will be interested to be part of the project to participate in the project conceptually and make a financial commitment. AmCham and Coca-Cola HBC presented the list of the potential participants of the Survey, stating that most of the companies with whom a call was made, are on the same page conceptually but won’t make a financial commitment until they know the actual financial input they need to commit. So far, 4 companies are firm to make a commitment – AUA, Coca-Cola HBC, Philip Morris, and Optym Armenia. 17 more companies will be deciding once the financial commitment amount is more or less clear, meaning after the Bid announcement and opening.

Ms. Syuzanna Hayrapetyan, UMBA rep will provide information regarding the companies’ participation but before that, she suggested to have another clarification webinar with the participation of experts. Another option which Ms. Karine Sarkissian, AmCham Executive Director recommended after the meeting is to have one to one calls with Ms. Elina Markaryan, FMCG the Committee Chair, Harutyun Alpetyan, Circular Economy Expert, AUA Acopian Center for the Environment and move from there, and if there still will be an issue, an extended webinar will be organized at the end of August and September.

Mr. Armen Martirosyan, CEO, Antares Media Holding suggested sending a request to the Ministry of Education, Science, Culture, and Sport and request to include in the school curriculum a program on environmental education, for the long run to educate the society from the school even from the kindergarten. It was communicated that this might be out of the scope of the Committee, but AmCham is ok to be a co-signee of the letter if UMBA initiates it, as given the resources AmCham can have a support role in this, rather than leading.

It was proposed that a meeting should be also held with the key stakeholders: Ministry of Environment Ecology, the Ministry of Territorial Administration and Infrastructure, EU, etc. to update on the project and identify the cooperation opportunities.

There are no upcoming events at this time.